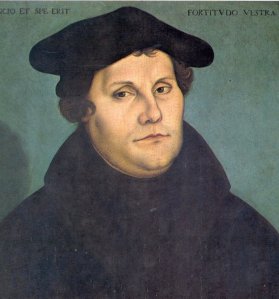 First of all, I would like to take a look at the etymology of the word “protestant”. The word “protestant” comes from the Latin word (verb) “protestari” which means “to declare publicly”. The declaration can be against something or it can be for something. For example, you can declare publicly to be against homosexual marriage or you can also declare publicly to be for traditional marriage. Protestant Christians declare publicly for things as well as against other things. Some claim that protestant Christians have their foundations in the man, Martin Luther, a Roman Catholic monk during the XVI century. The reason that he “protested” (declared publicly) was because he had repented while translating the Bible. Luther was a well educated man who had superior studies in the Catholic religion, yet at the same time, he had never really studied the Bible. The reason that he repented was because he decided to translate the Bible from Latin into his native language. While translating Saint Paul’s epistle to the church in Rome, he realized that he was a sinner and that he was in need of salvation, as are all humans. He also realized that salvation comes only through faith in the sacrifice and resurrection of Jesus Christ. Once he realized this, he repented and was born again. He received the Holy Spirit, just like the Bible teaches; hear the Word, understand the Word, repent, be born again. Once he repented and was born again, he began to look at the teachings of the Bible and at some of the teachings of the Catholic Church and decided that in many ways, some of the teachings of the Church were contrary to the clear teachings of the Bible. He saw that the majority of “Christians” were being deceived by the false teachings of the Church because they did not study the Bible for themselves and as a result, were not living a lifestyle of obedience to God. Because of all of the above mentioned, Luther decided to write his 95 theses. These 95 theses are against the false teachings of the Catholic Church and not necessarily against the Church (because there are many good teachings in the Catholic Church). Those who claim that the Protestant Church has its beginnings in Luther are only partly correct in saying this because the foundations of Luther and the Protestant Church are found in the Bible, the Word of God, which is much older than the XVI  Century. In fact, the Protestant Church is not a “new sect or cult” but instead its beginnings are older than both the Orthodox and Catholic Churches which appeared much later than the I Century.

16 All Scripture is inspired by God and profitable for teaching, for reproof, for correction, for training in righteousness ;

17 so that the man of God may be adequate, equipped for every good work.(II Timothy 3)

According to this text, the Scriptures are the supreme authority in the Christian’s life as well as in the Church. If the Scriptures are not the final authority in your life or in your Church then your faith has not been placed in the True God, the God of the Bible. The things that were happening in the Church during the days of Luther are the same things that are continuing to happen today in the lives of many who “go to Church” or consider themselves to be Christians. Just like Luther was not a true Christian (even if he were a monk) until he realized the importance of the Word of God and repented, being born again, so are you (not a true Christian) if the Bible is not the final authority in your life or in your Church. I know that sounds harsh but it is reality (according to God).

Let’s take a look at how the idea of the Bible’s supreme authority was demonstrated in the early Church (I Century, led by the apostles of Christ).

41 Sothen, those who had received his word were baptized ; and that day there were added about three thousand souls. 42 They were continually devoting themselves to the apostles’ teaching and to fellowship, to the breaking of bread and to prayer.

46 Day by day continuing with one mind in the temple, and breaking bread from house to house, they were taking their meals together with gladness and sincerity of heart, (Acts 2)

The first Christians were continually in the Word of God. They were devoted to the Word of God, meeting together day by day to study the Scriptures and then putting what they learned into practice during their daily lives. That is why God was continually adding to the number of Christians on a daily basis. Do you continually dedicate yourself to the study of God’s Word and application of the truths that you learn? What about your church, is there heavy emphasis placed on personal study of the Bible? Do you claim to be a Christian yet spend little or no time in studying the Bible? How do the teachings of your church compare with the clear teachings of the Bible?

As we have seen, the foundation of the Protestant Church is not only in the XVI Century but more importantly, in the I Century according to the Word of God

2) Sola Fide, Sola Gratia (3), Soli Deo Gloria (4) – which means salvation through faith, through grace and that all of the glory belongs to God for salvation. In other words, people (Christians) are saved only by faith which is the grace or unmerited gift of God. People are not saved through or because of their “good” works and no one “deserves” salvation. It cannot be “earned”. Paul describes these 3 truths in his epistle to the Church in Ephesus.

8 For by grace you have been saved through faith ; and that not of yourselves, it is the gift of God ;

9 not as a result of works, so that no one may boast.

10 For we are His workmanship, created in Christ Jesus for good works, which God prepared beforehand so that we would walk in them. (Ephesians 2)

The Bible clearly explains that mankind is in need of salvation and that salvation does not come from man, himself, meaning that he is in no position to gain or earn salvation through his good deeds or his merits. Salvation is a gift from God given to mankind through faith in the sacrificial work and resurrection of Jesus Christ. Mankind cannot do good works to earn salvation (as many religions and churches unfortunately teach). In fact, the Bible teaches that the good works of a man who is not saved are like filthy rags (literal translation; used feminine napkins) in the eyes of God. Our good works cannot bring about salvation. Salvation comes only through faith and it comes from God and not ourselves. This does not mean that Protestant Christians do not do good works or good deeds. In the previous verses we see that true Christians will do good works, but not in order to gain salvation but because of salvation. When a person is saved he begins to do the good works that God has already prepared for him. Good deeds are a way of life and not just a hope to gain God’s approval. So, we can clearly see that it is God who has prepared everything for us and He has given us the choice; to accept His way or to reject His way and try our own way. If He has done absolutely everything and offers it to us a gift, then of course all of the glory goes to Him. Do you do good deeds? Why? (in order to gain salvation or because of salvation)

14 how much more will the blood of Christ, who through the eternal Spirit offered Himself without blemish to God, cleanse your conscience from dead works to serve the living God ?

15 For this reason He is the mediator of a new covenant, so that, since a death has taken place for the redemption of the transgressions that were committed under the first covenant, those who have been called may receive the promise of the eternal inheritance.

19 Therefore, brethren, since we have confidence to enter the holy place by the blood of Jesus,

20 by a new and living way which He inaugurated for us through the veil, that is, His flesh,

The final argument that I would like to make is that some say that Protestant Christians are a minority and therefore are part of a cult or sect. Let’s take a look at the statistics to see how true this claim really is.

Just because there are not many Protestant Christians in your country does not mean that Protestants are a minority religion/denomination. Here is a break down of Protestants all over the world:

My dear friend, what is your relationship with God like? Have you surrendered your life to the Lordship of Jesus Christ? Do you study the Bible daily? Do you live according to the Word of God or according to your “religion”? May God bless and help us understand Him by having a personal relationship with Him.

6 comments on “What does it mean to be a Protestant Christian?”