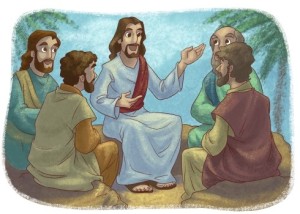 I was studying Matthew 10 today and as I was going through the passage in context, I discovered something that I had never seen before and I wanted to share that with you in this article. By the time we get to Matthew 10, Jesus’ disciples had been following Him for a while. They heard the message of repentance and faith in Jesus Christ. This calling was in the context of discipleship. Jesus taught them about repentance, and called them to follow Him as His disciple. The 12 answered the call. This calling was for any and everyone, but, the 12 were the ones who had answered the call. As they were walking with Jesus, He began to teach the crowds and at the same time, He was modeling ministry to His disciples. In chapter 10 of Matthew, Jesus is about to give the disciples a practical assignment. This is one of the things that makes Jesus’ teaching special. He not only taught theory (concepts), He also gave practical assignments so that the people could apply what they were learning. Jesus’ teaching was practical. This is extremely important. If teaching is not practical, people are not able to use it in their daily lives. Take a moment to read Matthew 10.

I. Jesus gives specific instructions before they go

Again, this reveals just how practical Jesus’ teaching was and still is today. He did not just give general statements. He gave very clear and specific instructions to the disciples so that they would know exactly what to do. Before going, they are given Jesus’ authority. They are not going in their own authority. They are not seeking to make a name for themselves. They are not going out to work their way to a position. Jesus’ gives them the position and the authority. They are to focus on preaching and teaching the Word of God. When you seek position and authority, or, when you climb the latter to position and authority, your preoccupation will not be preaching and teaching the Word to raise up new leaders. Your preoccupation will be keeping your position and authority. Many ministers face this problem. That is the beauty of having our position and authority given to us by God. We do not fight to get it. We do not have to fight to keep it. We focus on preaching and teaching the message of the Gospel and we want to raise up new leaders because we do not see them as a threat. Next, Jesus tells them the specific kind of people to look for when they go out to preach and teach. When they go, they have a specific message that they are to preach.

This reminds me of what Jesus preached to them when He began His public ministry back in Matthew 4.

17 From that time Jesus began to preach and say, “Repent, for the kingdom of heaven is at hand.”

The wording here lets us know that Jesus began preaching repentance and continued preaching it every where that He went. In the Gospel of Mark, we gain some more insight on what this message was that Jesus was preaching to the people everywhere He went.

14 Now after John had been taken into custody, Jesus came into Galilee, preaching the gospel of God,
15 and saying, “The time is fulfilled, and the kingdom of God is at hand; repent and believe in the gospel.”
17 And Jesus said to them, “Follow Me, and I will make you become fishers of men.” (Mark 1)

Be sure that the disciples were to preach discipleship which includes repentance, faith in Christ, and following Christ. In fact, later on in chapter 10, Jesus is going to tell the disciples what they are to preach and teach. He will reveal what He means by “the kingdom of heaven is at hand”. The next piece of advice or instruction, is that the disciples are to find people who are interested in the message and then stay with them and teach them as long as they can. If there are people who are not interested in repenting, leave them alone and search for others who are interested. Those who are not interested in discipleship which is repentance, faith, and following Jesus Christ are not worthy of the kingdom of heaven. They reject the entire package.

II. Suffering is part of being a disciple

Again, Jesus is not calling the disciples to discipleship. They are already disciples. He lets them know that it is going to be a difficult task of going and making more disciples. Jesus does not want people to be caught off guard. He wants them to know what they are getting into before they are blindsided. Jesus was not a manipulator. He did not try to use persuasive tactics to get people to follow Him. He was upfront about what it was going to cost them to repent, believe, and follow Him in discipleship. The cost was to be measured against the reward of eternal life in the kingdom of heaven. The disciples were going to be sent out with the message of the Gospel. The message of the Gospel was going to prick the sin nature of the people who heard it. They were going to get angry and want to lash out at something. Since they could not lash out at the message or at the God of the message, they would lash out at the messenger seeking to make disciples. They were going to be like sheep sent out among wolves. The more they preached, the more suffering they would face. The more suffering that they endured, the more opportunities they would have to testify about what they had experienced with Jesus Christ. Their own family members might reject them because of the Gospel. That was not to stop them. Persecution and suffering was not a surprise to them because they had seen how Jesus was persecuted for preaching the Gospel. In the midst of persecution, they were to preach the Gospel. What Jesus is teaching them in private, they are to yell from the rooftops.

III. How to call people to repentance

In verse 32 of Matthew 10, there is a change in the object. Up until this point, Jesus was speaking specifically to the disciples. The personal pronoun “you” was used by Jesus. In verse 32, the focus shifts to what the disciples were to teach the people with whom they came into contact. The pronouns shift to the third person singular forms. In order to become a disciple of Jesus Christ by repentance and faith, the people would have to confess Jesus Christ. To confess Christ means to agree with Him on who He says He is. Jesus claimed and demonstrated that He is God. Confessing Him means that we agree with Him about who He says He is. The other option is to deny Jesus Christ. This would mean denying repentance and faith as well as the process of discipleship. This would be to deny that Jesus is God and reject eternal life in the kingdom of heaven. In order to reap the benefits of the kingdom of heaven, the people who are called (hear the message preached by the disciples) are going to have to make a choice, make Jesus Christ their number 1 priority in life or reject Him as their Lord and Master. There are several noble priorities that people tend to choose over Jesus Christ. One is peace. They would rather reject Jesus as Lord and Savior because it may bring turmoil to the family. Jesus has to take priority number 1 over everything else, even your own family. Repentance, faith, and following Jesus are all summed up in this next verse:

38 “And he who does not take his cross and follow after Me is not worthy of Me.

Repentance is a change of mind. You stop depending on yourself and you look to Christ for help. Faith comes next. You trust the Lord Jesus for your rescue. This happens when you take up your cross. You stop trying to do things your way and you have only one path left in life to follow, the path of following Jesus Christ. The is the process of discipleship. Repentance, faith, and following Jesus. This is the message that the disciples were to teach the nonbelievers to whom they were going. They were not going to cal people to believe and then invite them into the process of discipleship. They were introducing the process of discipleship from the very beginning. This is echoed in the Great Commission in Matthew 28:

19 “Go therefore and make disciples of all the nations, baptizing them in the name of the Father and the Son and the Holy Spirit,
20 teaching them to observe all that I commanded you; and lo, I am with you always *, even to the end of the age.”

The disciples were not to go and make believers. They were to go and make disciples. Part of the process of discipleship is calling people to repentance and faith in Christ as well as the process of following Jesus. It is a packaged deal. We start making mistakes when we try to separate it out into individual parts. May the Lord help us preach the true Gospel that was given to the disciples by Jesus Christ Himself!