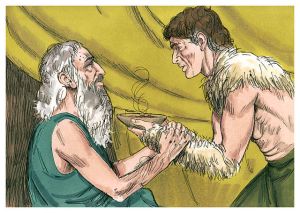 As we have been walking through the book of Genesis, we have noticed a pattern that appears in almost every chapter. Mankind deserves punishment for his sin, yet, God, being rich in mercy and grace, chooses to give mankind a Savior instead of the punishment that we deserve. We see faith appear in Genesis 4 when Eve believes that her firstborn son, Cain, is the promised Savior. Adam and Eve pass faith on to their sons Cain and Abel. Abel chooses to live by faith while Cain chooses to allow his sin nature to master him. Noah is a man of faith. He trusts God with his life and the life of his family. Abraham is known as the father of faith. He passes his faith on to his son Isaac and Isaac passes that faith on to his sons, Esau and Jacob. Esau chooses to live by his sin nature while Jacob chooses to live by faith. The story of Esau and Jacob continues in Genesis 27-28. Although Jacob lives by faith, he still makes mistakes. In the midst of those mistakes, he keeps his eyes on God’s eternal plan and is able to experience God’s mercy and grace. That same mercy and grace is available for Esau, yet, he keeps his focus on gratifying his desires.

I. Isaac and Esau

In Genesis 27, Isaac is an old man. He has lived his life well, walking by faith. Isaac was not a perfect man. He also made many mistakes. There was division in his immediate family. He loved Esau more than Jacob. His wife Rebekah loved Jacob more than Esau. There was much strife in the family because of this. Isaac does not know about the deal that Esau made with Jacob over a bowl of soup. Isaac wants to give the birthright blessing to Esau because he is the first born and he is Isaac’s favorite child. He calls Esau to himself and sends him out on one final mission. Esau goes on a hunt to prepare Isaac’s favorite meal and then receive the birthright blessing. Esau ends up not receiving the birthright blessing and we will get into that in a moment. I want to stay on this theme that Esau is a man of the flesh and not interested in eternal, spiritual things. If you remember back to Genesis 24, Abraham did not want Isaac to marry a pagan woman from among the Canaanites. Isaac does not want his boys to marry pagan women from among the Canaanites either. Jacob obeys his father yet Esau chooses not to obey. Esau just could not wait to have his desires met so he goes to see his uncle Ishmael and takes one of Ismael’s daughters as a wife. The root meaning of her name is “twisted, polluted, defiled, or sick.” It seems that this girl was an easy target for sexual gratification and Esau saw his chance to pounce. All of Esau’s choices revolve around gratifying his desires. Esau is very similar to Cain. Any of us can be Esau or Cain because we all have a sin nature. This is a warning from the Lord to all of mankind when looking at the power of our sin nature.

“If you do well, will not your countenance be lifted up? And if you do not do well, sin is crouching at the door; and its desire is for you, but you must master it.” (Genesis 4:7)

Rebekah is a woman of faith, just as Isaac is. But, she also has a sin nature which she either masters or, it masters her. She overhears the conversation between Isaac and Esau. She knows that Esau has already sold his birthright to Jacob. Now, she wants Jacob to receive the birthright blessing from Isaac before he dies. Rebekah devises a plan and gets Jacob to help her implement that plan. It is a deceptive plan. These actions help set up the need for God’s mercy and grace. Rebekah needs a Savior. Isaac needs a Savior. Jacob needs a Savior. They all deserve God’s punishment because of their sins, yet, God wants to show mercy. He also wants to give them a second chance, something that they do not deserve. This is the very definition of grace.

Through trickery, Jacob deceives his father and receives the birthright blessing that Esau had already sold to him. This event fulfills the prophecy that God spoke back in Genesis 25. God foretold that the older child will serve the younger. The younger child, Jacob, will take his place in the lineage of the coming Messiah. He had his eyes on God’s eternal calling and plan, just as his father Isaac did, as well as his grandfather Abraham. In Genesis 28, Jacob receives the same instructions that Isaac received from his father. He was not supposed to choose a wife from among the pagan, Canaanite women. Like Isaac, Jacob obeyed. Jacob learned much about the character of God from his father Isaac. Jacob learned that God is El Shaddai, the Almighty God who pours his life into the life of His creation. He transforms His people from the inside out the way that He transformed Abram to Abraham. Isaac taught Jacob that God is Elohim, the all powerful Creator God. Jacob learned that God is Jehovah, the Self-Existing One who connects with people for their benefit and not His own benefit. Jacob has been taught about God but he has yet to experience God the way that Isaac and Abraham did. That is all about to change.

I have mentioned earlier that mercy means not getting what you actually deserve while grace means getting what you do not deserve. God is merciful. God is gracious. He manifests these qualities in His relationship with His creation. Mankind deserved immediate, eternal punishment the moment that Adam and Eve sinned. God held off that punishment revealing His mercy. Immediately, He followed His mercy with an extension of grace. We do not deserve a second chance but God promises to give grace to us in the form of a Savior/Rescuer. While reading this story, it is easy to see that Jacob needs mercy. He deserves punishment for his deceptive actions. He does not deserve a second chance and the opportunity to be in the lineage of the Messiah yet, that is exactly what God offers. In Genesis 28, God finally reveals Himself to Jacob personally. Jacob knows a lot about God yet now, he finally experiences God. The Abrahamic Covenant is extended to Jacob and he steps into the lineage of the Messiah. He is to inherit the land and he is told that through his seed, the entire earth will be blessed. Jacob continues to live by faith, with God’s eternal plan in view. This is a beautiful picture of the mercy and grace of God that is  also extended to each person, the same way that they (mercy and grace) were extended to Jacob. Have you experienced the mercy and grace of God? Are you living a life of faith? Do you know the character of God? Do you have a personal relationship with God? Do you experience the blessings of walking with God? This relationship is available for anyone who accepts Christ as Lord and Savior.