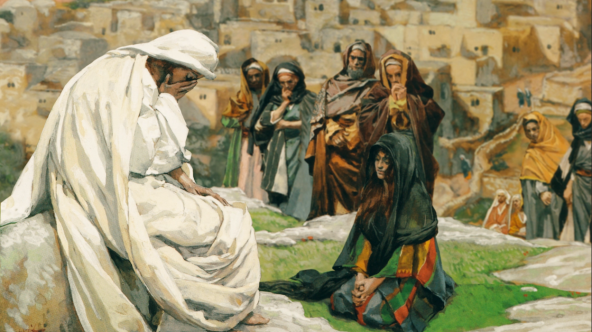 I am getting ready to teach tonight at our church. I have a lesson with the AWANA kids and we are going to study John 11. This is a fascinating chapter because in verse 35, we find the shortest verse in the Bible. Why did Jesus weep? Some say that it is because He was heartbroken over the death of Lazarus. Others claim that He wept because Mary and Martha were mourning over the death of their brother. While those seem like logical conclusions, I do not feel that the text leads us to that conclusion. We read that into the text based on our own experienced. There are three key players in this text that work together to explain the purpose of this passage in the Bible. One of the key players is Jesus. He is referenced more in this passage than anyone else. The verb “believe” is referenced 8 times in this chapter, making it another key player in the story. Another word that is mentioned three times in this chapter is “resurrection”. All three of these key players lead us to the logical conclusion of the text.

I. The Disciples need to believe

The story begins with us learning that Lazarus is sick. Upon learning of Lazarus’ illness, here is how Jesus responds:

But when Jesus heard this, He said, “This sickness is not to end in death, but for the glory of God, so that the Son of God may be glorified by it.” (John 11:4)

Jesus is confident that death is not the end of the story and, He also knows that this situation is going to reveal the glory of God. Jesus knows that He will be glorified because of this event. Also, Jesus is not worried about what is going to happen to Lazarus.

So when He heard that he was sick, He then stayed two days longer in the place where He was. (John 11:6)

Jesus stayed two more days where He was. There was plenty of time for Jesus to go to Lazarus and heal him. Jesus could have spoken a word and Lazarus would have been healed immediately, yet that is not what He did.

Jesus was not caught off guard by the death of Lazarus. In verse 15, He even mentions that He is glad. Why? The text gives us two reasons; 1) God is going to be glorified 2) this event will lead others to faith in Christ. The disciples, even though they are following Jesus daily, still need to believe. They need to be convinced that Jesus is who He says He is. The disciples are not the only ones. Mary and Martha also need to be convinced. What about you, do you believe that Jesus is who He claims to be? Do you trust Him based on who He is? Will you do what He asks you to do?

17 So when Jesus came, He found that he had already been in the tomb four days.

21 Martha then said to Jesus, “Lord, if You had been here, my brother would not have died. (John 11)

Martha seems critical of Jesus here. This is not the first time that she has criticized Jesus. She did the same when Jesus visited their house back when Lazarus was alive. Martha was upset that Jesus would not rebuke her sister Mary for not helping her serve. Jesus sees the teaching opportunity and begins to teach Martha, leading her to a place of belief.

23 Jesus said to her, “Your brother will rise again.”
24 Martha said to Him, “I know that he will rise again in the resurrection on the last day.”
25 Jesus said to her, “I am the resurrection and the life; he who believes in Me will live even if he dies,
26 and everyone who lives and believes in Me will never die. Do you believe this?”

Her confession is spot on. She knows the lingo. She knows all of the correct things to say. That does not impress Jesus. He once preached a sermon and said the following:

21 “Not everyone who says to Me, ‘Lord, Lord,’ will enter the kingdom of heaven, but he who does the will of My Father who is in heaven will enter.
22 “Many will say to Me on that day, ‘Lord, Lord, did we not prophesy in Your name, and in Your name cast out demons, and in Your name perform many miracles?’
23 “And then I will declare to them, ‘I never knew you; DEPART FROM ME, YOU WHO PRACTICE LAWLESSNESS.’ (Matthew 7)

But back to Martha’s confession, she mentions that she believes that Jesus is:

39 Jesus said, “Remove the stone.” Martha, the sister of the deceased, said to Him, “Lord, by this time there will be a stench, for he has been dead four days.”
40 Jesus said to her, “Did I not say to you that if you believe, you will see the glory of God?” (John 11)

Martha had called Jesus Lord but now she opposes His will. Martha does not want to submit to the authority of Jesus. Martha reveals that her correct confession did not lead to the obedience that faith evokes. Once the resurrection of Lazarus takes place, maybe Martha’s confession will lead to faith that produces obedience.

III. The Crowds need to believe

The resurrection of Lazarus helped the disciples believe. Hopefully, it helped Martha believe. Now, we turn to the crowds because they need to be convinced that Jesus is God so that they can believe too. Jesus prays before resurrecting Lazarus.

41 So they removed the stone. Then Jesus raised His eyes, and said, “Father, I thank You that You have heard Me.
42 “I knew that You always hear Me; but because of the people standing around I said it, so that they may believe that You sent Me.”
43 When He had said these things, He cried out with a loud voice, “Lazarus, come forth.”
44 The man who had died came forth, bound hand and foot with wrappings, and his face was wrapped around with a cloth. Jesus said to them, “Unbind him, and let him go.”
45 Therefore many of the Jews who came to Mary, and saw what He had done, believed in Him. (John 11)

Jesus prayed and then resurrected Lazarus so that the crowds would be convinced that He is God and believe in Him as the Messiah. Many of the people in the crowd were convinced that Jesus is God and they chose to believe in Him as the Messiah. Notice that the text reads “many”. What about the rest of them? They saw a genuine miracle. Were they not convinced or, did they simply choose not to believe?

But some of them went to the Pharisees and told them the things which Jesus had done. (John 11:46)

Yes, although they witnessed the same event and heard the same message, they willingly chose to ignore the evidence and chose not to believe in Jesus. The same is true today. There are many  who examine the evidence about Christ, yet, they choose not to believe. What’s worse though, are those who have the right confession like Martha, yet, oppose the will of God through their actions. Hopefully, they will be convinced by the power of Christ the way that Martha was or, as we saw in Jesus’ sermon, He will send them away from His presence on Judgment Day.

May the Lord help us to believe and organize our days so that we live to accomplish the will of God in our daily lives!