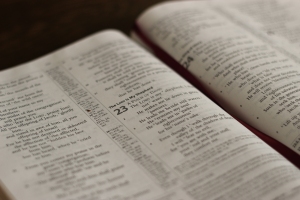 God has attached His good Name to His Word. God is serious about keeping our word because He always keeps His Word, even when it seems impossible. God promised the children of Israel that if they followed His Word, He would bless them and protect them all the days of their lives. The children of Israel promised to obey but, they were unable to keep their word. God also promised to discipline the children of Israel if they did not keep His Word. Since God has tied His very existence to keeping His Word, He has to keep His promises. Even as God brought severe discipline in the lives of the children of Israel, He continued to show His mercy and grace to them. He always foretold His next move and gave ample opportunity for repentance, forgiveness, and transformation. The children of Israel thought that God would not do what He promised since they were people who did not keep their promises. After God severely punished the Northern Kingdom of Israel, He used that discipline as an example to stir the Southern Kingdom to repentance. The Southern Kingdom simply ignored the Word of God. In the midst of His discipline on the Southern Kingdom, God reminded the people that, even though they were faithless, He would remain faithful to His promises. He promised that they would return to the land after captivity and that Jerusalem and the Temple would be rebuilt. During about a 70 year period, the Temple lay in ruins along with the city of Jerusalem. Things seemed very bleak for the children of Israel. It seemed that God would not be able to keep His promise. During the period of exile and captivity, the Lord used Daniel to encourage the people by reminding them to repent and experience the mercy and grace of God as well as the fact that He (God) would return the children of Israel to the Promised Land. It seemed impossible but, although things seem impossible with man, all things are possible with God. This is where our story picks up in the book of Ezra. God has moved in the live of a man named Nehemiah to challenge him to lead the captives back to the Promised Land. God also stirs in the heart of a prophet named Ezra.

I. King Cyrus of Persia obeys the Lord

The Babylonian king, Nebuchadnezzar, conquered the Southern Kingdom of Israel, destroyed the city of Jerusalem, and obliterated the Temple. Then, he took many captives of Israel back to Babylon. One of those captives was Daniel. As a man of God, Daniel used his influence in Babylon to introduce the pagan Babylonians to the God of Israel. King Nebuchadnezzar had an encounter with the God of Israel and he was broken. He became a changed man. His descendants did not follow his example, although Daniel was there to share the Lord’s Word with them as well. Then, Babylon was conquered by another pagan empire, the Medes and Persians. The Persians were the stronger of the two and they ended up ruling over Babylon, including the children of Israel who were there. Most of the children of Israel adopted the pagan ways and ignored the Word of God. Daniel remained a student of the Word of God all the days of his life. Nehemiah followed in Daniel’s footsteps as well as Ezra. Daniel also shared the Word of the Lord with the pagan Persians. Cyrus is one of those leaders who was influenced by the Word of God.

God had used the prophet Jeremiah to remind His people that they would return to the Promised Land after about 70 years of captivity. It seemed like this new king, Cyrus, was not interested in letting the captives go. But God intervened.

2 “Thus says Cyrus king of Persia, ‘The LORD, the God of heaven, has given me all the kingdoms of the earth and He has appointed me to build Him a house in Jerusalem, which is in Judah.
3 ‘Whoever there is among you of all His people, may his God be with him! Let him go up to Jerusalem which is in Judah and rebuild the house of the LORD, the God of Israel; He is the God who is in Jerusalem.
4 ‘Every survivor, at whatever place he may live, let the men of that place support him with silver and gold, with goods and cattle, together with a freewill offering for the house of God which is in Jerusalem.’ ” (Ezra 1)

King Cyrus refers to God as Jehovah and Elohim. The Word of the Lord was in Babylon during the entire captivity. Daniel wrote his book while in captivity. The Word of God reached the king’s ears while he was in the first year of his reign. This pagan king, Cyrus, refers to the character of God when he calls Him by name. Jehovah means the self-exisitng One. Elohim means the all powerful Creator God. King Cyrus has come to learn that God created him and that God has authority over the king of the world. This is a mighty revelation. King Cyrus sees himself as a servant of God by carrying out the will of God. King Cyrus is obedient to the Word of God. Not only is king Cyrus going to send the children of Israel back to Jerusalem and pay for the trip himself, he is also going to fund the project to rebuild the Temple. This is something that only God could have done.

5 Then the heads of fathers’ households of Judah and Benjamin and the priests and the Levites arose, even everyone whose spirit God had stirred to go up and rebuild the house of the LORD which is in Jerusalem.
6 All those about them encouraged them with articles of silver, with gold, with goods, with cattle and with valuables, aside from all that was given as a freewill offering.
7 Also King Cyrus brought out the articles of the house of the LORD, which Nebuchadnezzar had carried away from Jerusalem and put in the house of his gods;
8 and Cyrus, king of Persia, had them brought out by the hand of Mithredath the treasurer, and he counted them out to Sheshbazzar, the prince of Judah. (Ezra 1)

Not only did God use the Baylonians and Perisans to discipline the children of Israel, He also used them to protect the valuable articles of the Temple so that they could be returned and placed in the new Temple. Again, this is something that only God could have done.

II. The children of Israel obey the Lord

God moved in king Cyrus’ heart and he responded with obedience. This seems to have set an example for the children of Israel.

1 Now when the seventh month came, and the sons of Israel were in the cities, the people gathered together as one man to Jerusalem.
2 Then Jeshua the son of Jozadak and his brothers the priests, and Zerubbabel the son of Shealtiel and his brothers arose and built the altar of the God of Israel to offer burnt offerings on it, as it is written in the law of Moses, the man of God. (Ezra 3)

The children of Israel had turned back to the Law of Moses. A revival is brewing because the people were turning back to the Word of God and seeking earnestly to obey the Lord. As a result of turning back to the Word of the Lord, the people began to offer sacrifices to the Lord. They were ready to sacrifice of their possession to build an altar to the Lord and then to worship Him according to His Word. Many people believe that we can worship God however WE  feel like it. On the contrary, God has established in His Word the kind of worship that He requires. We worship God, not the way we want to, instead, we worship Him according to His desires. This is exactly what the children of Israel were doing. Revival is breaking out among the people. There is a pattern here that we can learn from. When we return to the Word of God and seek to live out what He teaches us, the natural reaction to this is revival among the people around us.

4 They celebrated the Feast of Booths, as it is written, and offered the fixed number of burnt offerings daily, according to the ordinance, as each day required;
5 and afterward there was a continual burnt offering, also for the new moons and for all the fixed festivals of the LORD that were consecrated, and from everyone who offered a freewill offering to the LORD. (Ezra 3)

Why is this celebration so important? The Feast of Booths was an annual celebration to remind the children of Israel of how God dwelt among them while they were in the wilderness on their way to the Promised Land. They are now back in Jerusalem and preparing to rebuild the Temple. They are reminded of the presence of the Lord among them. God had kept His Word. The people turned to the Word of God. Revival broke out. God brought His people back to the Promised Land. They are living to worship God by being obedient to His Word for the first time in years. The discipline of the Lord worked. The people had returned to Him. Revival broke out and an entire generation of people was transformed.

10 Now when the builders had laid the foundation of the temple of the LORD, the priests stood in their apparel with trumpets, and the Levites, the sons of Asaph, with cymbals, to praise the LORD according to the directions of King David of Israel.
11 They sang, praising and giving thanks to the LORD, saying, “For He is good, for His lovingkindness is upon Israel forever.” And all the people shouted with a great shout when they praised the LORD because the foundation of the house of the LORD was laid.
12 Yet many of the priests and Levites and heads of fathers’ households, the old men who had seen the first temple, wept with a loud voice when the foundation of this house was laid before their eyes, while many shouted aloud for joy,
13 so that the people could not distinguish the sound of the shout of joy from the sound of the weeping of the people, for the people shouted with a loud shout, and the sound was heard far away. (Ezra 3)

Worship has once again become a way of life for the people of God. They had been sidetracked for so many years. Generation after generation had just given lip service to worship. Revival has caused worship to be a way of life again. This entire process began with returning to the Word of God. When people begin to return to the Word of God in vast numbers, revival cannot help but break out. Worship will become the norm in every family and an entire generation can be transformed. Don’t you want that for your generation and for the generations that follow? Return to the Word of God. Seek the Lord earnestly in His Word. Begin to worship God according to His desires and watch revival break out in your family, in your church, in your community, and in your nation!