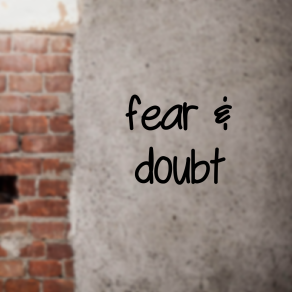 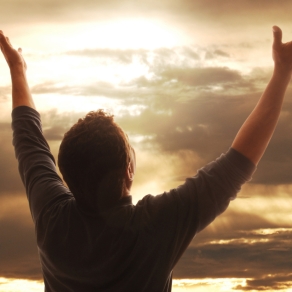 Last week, we took a look at our great salvation in Jesus Christ. This week, we are digging into the Gospel of Luke, chapter 1. Our lesson will cover the birth of John the Baptist. In this lesson, we will begin with fear and doubt that, through faith, leads to praise and service of the Lord. I do not know about you, but, to me, this is very, very good news. I know what it means to be afraid. I know what it means to doubt and be uncertain. I can relate to those feelings and emotions and I would be willing to bet that you can relate to them as well. Zacharias  was a servant of the Lord who struggled with fear and doubt. That reassures me to read about because I can relate. If you ever struggle with fear and doubt, this lesson is for you, just as much as it is for me. Let’s dig down in Luke 1 and learn how we can go from fear and doubt to praise and service. END_OF_DOCUMENT_TOKEN_TO_BE_REPLACED 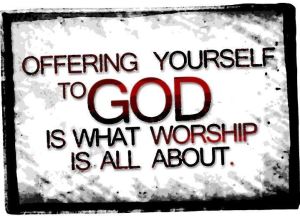 I had the privilege last night of teaching Romans 12:1-8 to our Journey kids at AWANA. These are high school students who are looking to the future. They are making decisions at this time in life that will impact the rest of their lives. Many are thinking about their future; what superior studies they would like to attain, what kind of job they would like to have, where they want to live in the future etc. These are tough decisions for teenagers to contemplate. The most important decision that anyone could ever make is dedicating his or her present and future to serving the Lord. What does that look like practically? The apostle Paul gives us the answer in Romans 12. END_OF_DOCUMENT_TOKEN_TO_BE_REPLACED 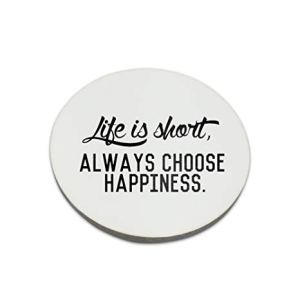 “But God wants me to be happy, doesn’t He“? I have heard people declare this many times, in the form of a question of course, even though their minds are already made up. Mantras like “YOLO” were popular at one time. “If it feels good, do it” was another popular saying for a time. If you do not know, YOLO means “you only live once” which implies, have fun at all costs because you only get one time around. Each older generation declares that the younger generations are selfish, unlike themselves, when they were younger. I want to look at a passage of Scripture that speaks of people about 3,000 years ago. According to our modern way of thinking, the people 3,000 years ago should have been much less selfish than we are today because each generation claims that the next generation is much more selfish. Let’s take a practical look at the people of Israel, almost 3,000 years ago. END_OF_DOCUMENT_TOKEN_TO_BE_REPLACED 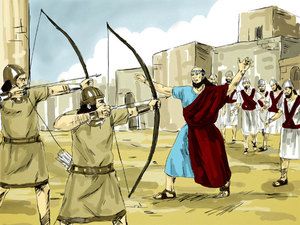 This past Sunday, we looked at our second lesson on the life and ministry of the prophet Elisha. We saw how Elijah took Elisha under his wing and trained him for the ministry. In the beginning of his ministry, Elisha was not quick to extend mercy and grace to his enemies. Instead, he called down fire from heaven on two different occasions to consume his enemies. But, as he continued to minister, we see him change to a person who extends mercy and grace to those around him, even to his enemies.

The passage that we studied in class comes from II Kings 6. But, I want to give some context by quickly recapping what took place in II Kings 4-5. Elisha the prophet has several encounter with several different people in these chapters and there are some common character traits among these people. END_OF_DOCUMENT_TOKEN_TO_BE_REPLACED

I had the honor of teaching our Journey Kids during AWANA last night at Southern Calvert Baptist Church. These are all high school students who are trying to figure out what life is all about. They have millions of voices via the internet and mass media pulling them in all different directions. Praise the Lord that they are involved in a weekly Bible study that helps ground them in reality. Last night, we began a study on the book of Romans. What an amazing book of the Bible!!! I would like to share some of the insights that we learned last night during our study time. END_OF_DOCUMENT_TOKEN_TO_BE_REPLACED 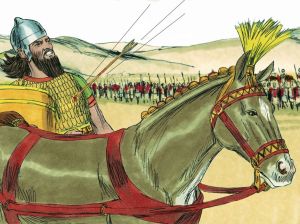 I finished off the last article with a cliffhanger. Elijah confronted the sins of wicked King Ahab and there was a showdown between the false prophets and God’s prophet, Elijah. Elijah had the wicked, false prophets put to death for their actions. Then, he was sent to pursue King Ahab and his wicked wife, Jezebel. That is how the story ended. King Ahab and Jezebel must pay for their deeds. They rebelled against God and murdered the prophets of the Lord. They led the people in idolatry. The rest of this story unfolds in I Kings 20-22. These are some fascinating chapters in the Word of God. END_OF_DOCUMENT_TOKEN_TO_BE_REPLACED 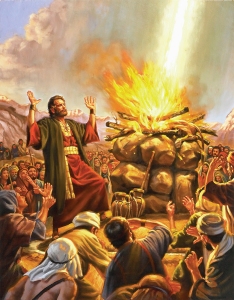 Once again, I am sitting to write out my lesson for this coming Sunday. At Southern Calvert Baptist Church, we are walking through the entire Bible over a three year period. Last week, we covered the lesson on Elijah and the widow woman from I Kings 17. Jesus actually uses this woman’s faith as an example of what genuine faith looks like. She heard the Word of the Lord and she chose to trust the Word of the Lord, even when it meant putting her life and future on the line.

Elijah is a man of faith. He has a very difficult task ahead of him. He was called by God to take a very difficult message to the leadership of Israel. He publicly rebukes King Ahab for his wicked ways and then he prays according to the Word of God. As a result of that prayer, it does not rain in Israel for three and a half years. There is a severe famine in the land and everyone is suffering. The widow from the previous chapter was suffering because of this event. King Ahab is enraged and his wife actually begins putting to death the prophets of the Lord. One of King Ahab’s own servants, a man who fears the Lord, hid one hundred of the Lord’s prophets in two different caves so that they could not be put to death. He also provided food and water for them. King Ahab does not know about this. Elijah has survived the persecution but he is on the run. Things are bad in Israel physically, politically, spiritually etc. This is where our story picks up in I Kings 18. END_OF_DOCUMENT_TOKEN_TO_BE_REPLACED 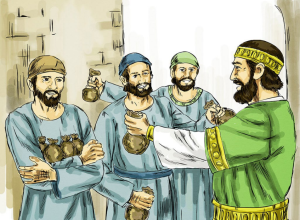 I am preparing to preach this Sunday at Southern Calvert Baptist Church. I am going to preach on the parable of the talents. Our main passage is Luke 19:11-26 and I will also use Matthew 25:14-30 to add some details to the story.

There are two major gifts (talents) that the Lord has given to every single human being. Those two gifts are the gift of life and the gift of time to live life. The Bible teaches us that we can use time one of two ways. We can spend our time wisely or we can spend our time unwisely. Time is a commodity that we spend daily. We receive it as a gift and then we choose how we use it. In the parable of the talents, Jesus wants to teach us how to use our time wisely until the moment when He establishes His earthly kingdom. END_OF_DOCUMENT_TOKEN_TO_BE_REPLACED 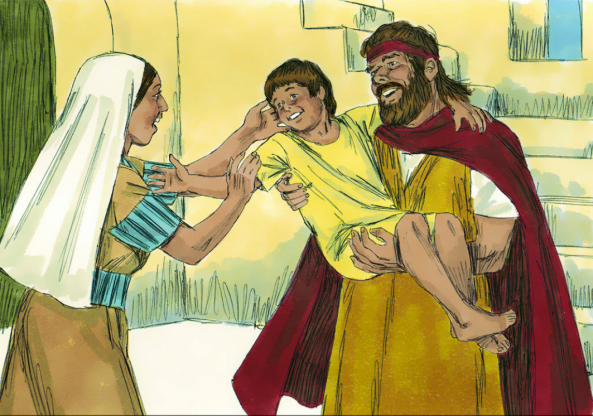 At Southern Calvert Baptist Church, we are continuing to study through the Gospel Project, a three year comprehensive study of the entire Bible. We have arrived at the book of I Kings.

At this point in the history of Israel, things are bad. There is a king named Ahab who is a very ungodly man. God has a faithful follower named Elijah. God had trained Elijah to act during this difficult time. Elijah stands before king Ahab and prays that the Lord will withhold the rain from His people. This prayer comes from the Word of God. In Deuteronomy, the Lord told His people that if they obeyed Him, He would send rain at the right time. He also said that if His people did not obey Him, then He would shut off the rain from heaven. Elijah prayed that the rain would stop, according to the Word of God. The Lord kept His Word and shut off the rain from heaven. How is God going to be glorified in the midst of all of this? Suffering is coming. The drought is going to lead to famine. What is the Lord doing? Is there a purpose in this? Yes, of course there is. Eventually, after three and a half years, the people are going to repent and return to the Lord. Also, the Lord is going to use this situation to draw a person who is seeking Him to Himself. END_OF_DOCUMENT_TOKEN_TO_BE_REPLACED 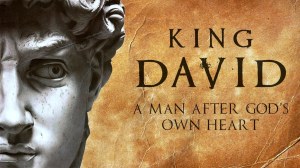 Last week during our Connect Group at Southern Calvert Baptist Church, we took a look at the contrast between King Saul and David. King Saul was a man who trusted in himself. The prophet Jeremiah teaches that a man who trusts in himself is like a bush planted in the desert on top of a rock that is covered in salt. The results are catastrophic. King Saul’s life was one disaster after another. The Lord allowed King Saul to rule for over 40 years as punishment to the children of Israel because they rebelled against the Lord and asked for a king so that they could be just like the pagans. David, the future King of Israel was a man who trusted in the Lord. The prophet Jeremiah also teaches that a man who trusts in the Lord is like tree planted next to the water, with roots that extend deep and tap into the underground water supply. Even when drought comes, the tree continues to produce fruit. David lived a fruitful life for the Lord. God allows us to choose our actions but, He has already announced the consequences of those actions. END_OF_DOCUMENT_TOKEN_TO_BE_REPLACED